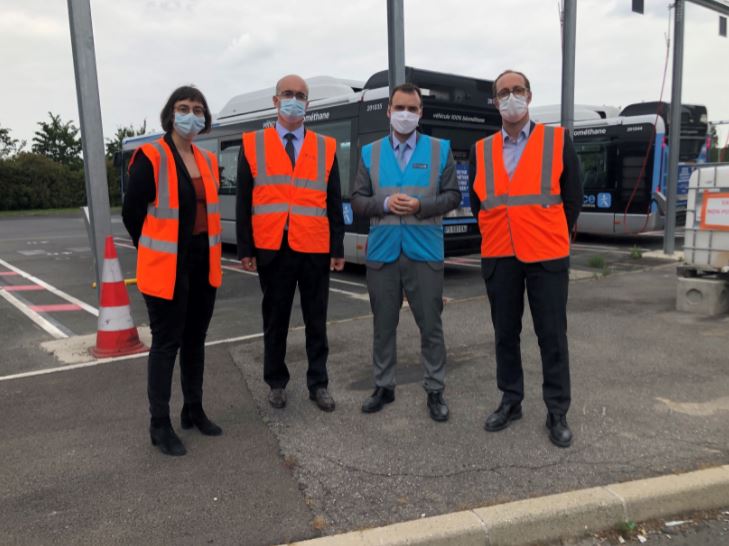 It is no coincidence that the Limeil-Brévannes depot was chosen for this pilot project of energy conversion in Île-de-France. Indeed, if Compressed Natural Gas (CNG) is chosen as the preferred energy for the Paris inner suburbs, Transdev was specifically requested due to its know-how by the Regional Transit Authority for projects in Île-France.

The first step is the conversion of the bus depots for which Transdev are responsible. Thus 22 CNG projects have been entrusted to Transdev on behalf of the Paris Region Transit Authority. Among these projects, 20 consist of creating a new supply of gas to the bus depots; the latter is then compressed to supply the buses at the depots mainly with slow charge at night or with rapid charging for certain vehicles (workshop outings, supplements, etc.).

The other two projects include the creation of slow charging places in Marcoussis and a standard station at the Wissous workshop with the use of a public charging station.

Since 2018, Transdev has relied on Transamo’s expertise in natural gas compression and distribution installations and ATEX* maintenance workshops, at all stages: feasibility studies, drafting of technical and administrative specifications for design-construction-maintenance, analysis of offers and selection of companies, monitoring and proofreading study documents to ensure contractual and regulatory compliance , monitoring of tests, commissioning, acceptance and Regular Service Checks.

The the bus depots in Limeil-Brévannes, Lieusaint, Ecquevilly, Conflans, Sainte-Geneviève-des-Bois, Villepinte, Bailly-Romainvilliers, Brie-Comte-Robert were put into operation on time in August last year with some controlled impacts linked to the health crisis. Thierry Mallet, CEO of Transdev Group had the pleasure of welcoming Laurent Probst and Valérie Pécresse for the inaugurations of the bus depot in Lieusaint that went into operation in October and Conflans in February 2021.

A second wave of converted bus depots in progress

Thanks to this success, Île-de-France Mobilités wanted to entrust Transdev with a new wave of conversion of 8 bus depots. In addition, Transdev has initiated 5 other conversion projects provided for in the new public service delegation contracts awarded to Transdev.