Paris (France) – December 2, 2021 – Transdev, Europe’s leading operator of zero-emission electric buses, has gathered representatives from around the world for the sixth edition of its Zero Emission “Living Lab”. The virtual conference was held on Wednesday, December 1 to discuss and advance the ZE electric public transportation field, with recent developments and advances in the field of battery-electric and hydrogen buses.

In 2021, Zero Emission momentum has continued growing in the transportation industry. At a European Union level, this dynamic has not been curbed by the Covid-19 economic and sanitary crisis. Following the launch of the European “Fit for 55” objective of a 55% reduction in GHG emissions by 2030 (all industrial sectors), the new target set by the EU in 2020, Transdev has adopted "Moving Green", its new Environmental Strategy launched at the start of 2021, to meet these new challenges.

We started in 2018, where we set a CO₂ emission reduction target of 30% and we have already reached 9%, while we are working on new objectives in line with the increased European ambition. We have now reached a share of 13% of alternative energy vehicles in our fleet. With its new Moving Green Environmental Strategy launched in early 2021, Transdev reaffirms its role as a key player in the ecological transition. 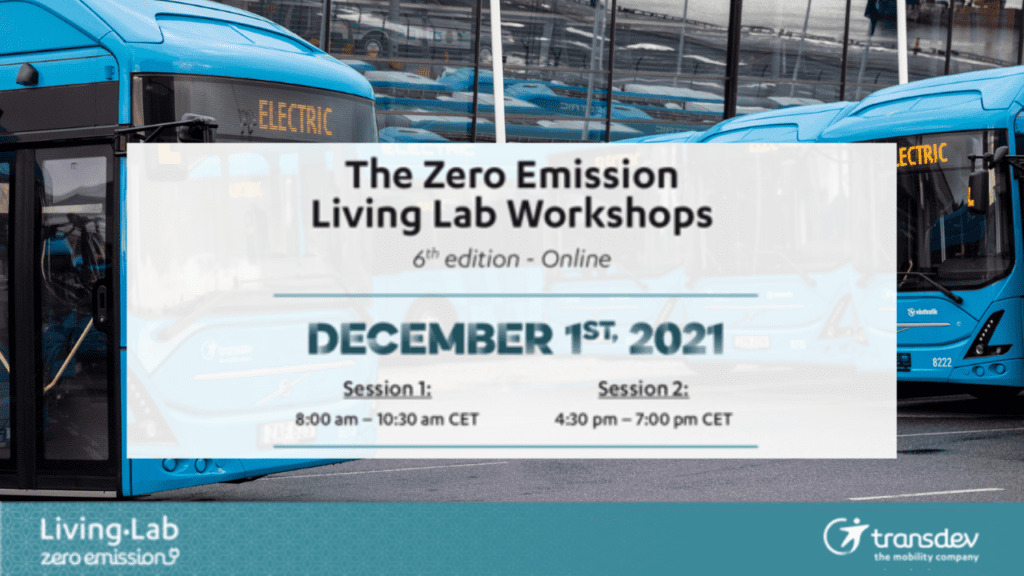 In the morning session, Transdev welcomed in particular the Transit Authorities of Auckland (New Zealand) and Göteborg (Sweden) which addressed respectively:

On the energy production side, we looked in-depth at solar energy in Australia, and energy from urban waste as well as sourcing green energies. In the afternoon session, one of the key features was the view from Quebec (Canada) on mobility electrification, as Hydro Québec strongly relies on hydroelectricity including for the production of green hydrogen. Key highlight included the electrification strategy in Chile, with the Transportation Minister Gloria Hutt Hesse. On hydrogen, viewpoints from California (USA) and Normandy (France) showed that momentum is rising for this promising energy source.

The wide geographical representation of participants is a strong sign that Energy Transition in mobility is at the top of local government agendas worldwide. Their diversity of profiles is a proof that the Zero Emission challenge concerns us all, if we want to succeed in addressing it fully. We are convinced that the presentations and debates at our Zero Emission Living Lab have brought answers and raised questions, playing its role in further advancing our collective knowledge on electromobility strategies, initiatives and daily operations.

Beyond pure battery-powered buses, Transdev has already embarked on the deployment of hydrogen, fuel-cell electric buses and coaches with projects and operations in France (Lens, Auxerre, Toulouse, Normandy), the Netherlands (HWGO), Sweden (Gävle) and New Zealand (Auckland). Finally, in 2023, Transdev will be testing a hydrogen train with Siemens Mobility in Bavaria (Germany).

Transdev considers hydrogen to be one of the key energies for future zero emission mobility. France, Germany and the European Union have announced massive financial support for developing hydrogen technology, in particular with “green” hydrogen, all of which should allow us to build on this great start and to learn more about operating fuel cell electric vehicles and more about their ecosystem, allowing Transdev to reaffirm its status as a Zero Emission leader.

As an operator and global integrator of mobility, Transdev – The mobility company –empowers freedom to move everyday thanks to safe, reliable and innovative solutions that serve the common good. We are proud to provide 11 million on average passenger trips everyday thanks to efficient, easy to use and environmentally friendly transportation services that connect people and communities. Our approach is rooted in long-term partnerships with businesses and public authorities, and in the relentless pursuit of the safest and most innovative mobility solutions. We are a team of people serving people, and mobility is what we do. Transdev is jointly held by Caisse des Dépôts Group (66%) and the Rethmann Group (34%). In 2020, with 83,000 employees in 17 countries, the Group generated total revenues of € 6.75 billion.