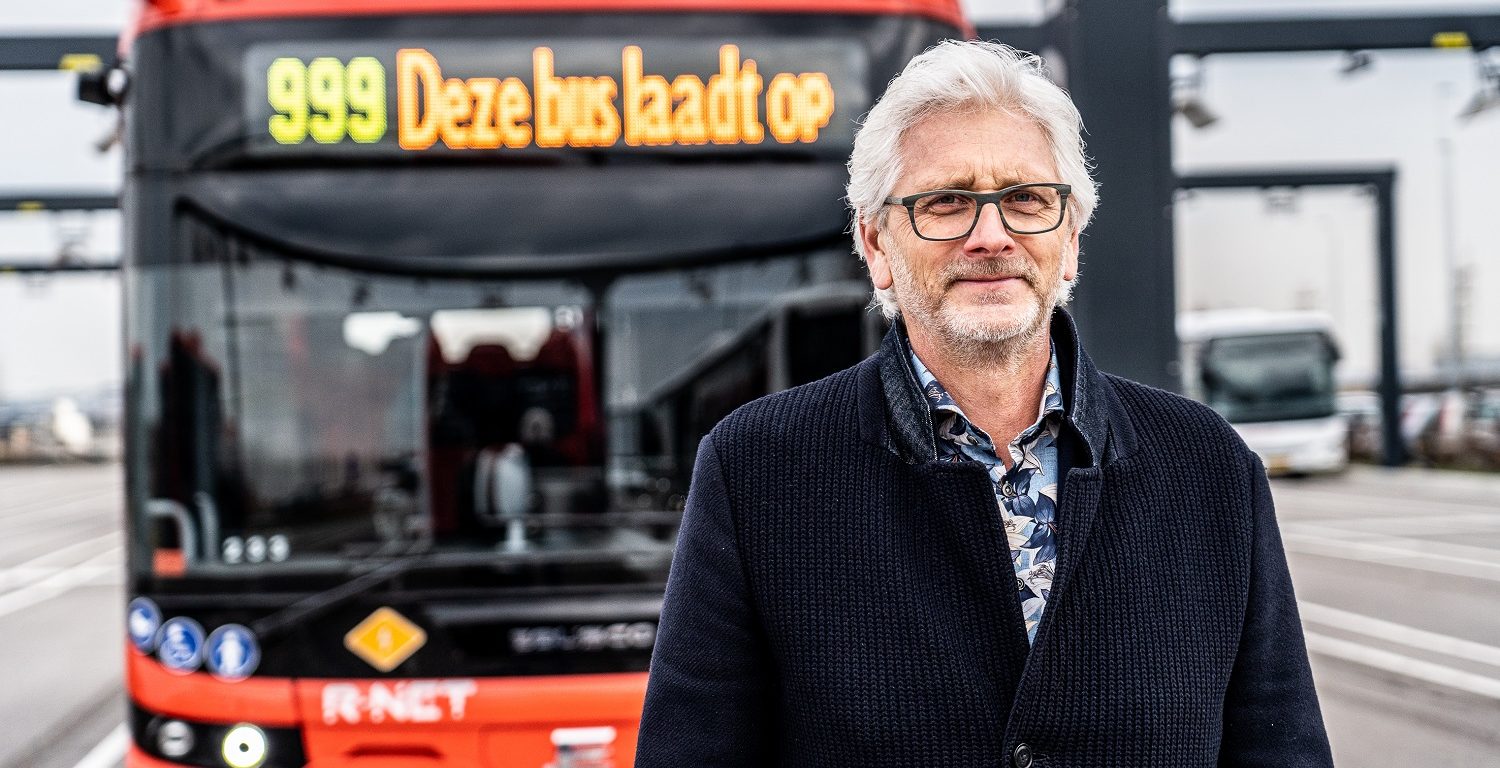 These days, if it is not a hard requirement in a tender, it is at least a compelling desire: Zero Emission (ZE) vehicles, vehicles with no harmful emissions. Electric buses, electric cars and hydrogen-powered buses have become an integral part of the street scene. Yet it was only about five years ago that Transdev in the Netherlands put the first large electric bus fleet on the road in the city of Eindhoven.

If you consider that at that time it was the largest electric fleet in Europe, you can probably imagine what an enormous challenge that must have been. Bart Kraaijvanger, now manager of the ZE program in the Netherlands, stood at the cradle of the project with his team: « it had never been done before, press from all over the world were lining up. We really had a first! »

When Bart completed his degree in Automotive Engineering, hardly anyone had heard of ‘Zero Emission’. He planned to go out into the wide world but was actually pulled into the family business almost immediately: a taxi company in Nijmegen.

Here I spent some time putting things in order in terms of automation. It was a time when all business operations were still done on paper when computers made their appearance. It was quite difficult to get my father on board, for example, but in the end I was able to set things in motion. At that moment I thought I could still go out into the world, but things turned out differently.

In fact, Bart continued to work in the family business. A great opportunity presented itself when the taxi company was taken over by Hermes in 1995.

At that time Hermes had just been newly formed from a merger between Zuidooster and VSL and wanted to make use of our expertise. However, in order to avoid any awkward faces as ‘the son of the taxi boss’, I had to attend a kind of audience with the director of Hermes. That went well, I could stay and became the director of our former taxi company.

A few years later he received an offer: « whether I wanted to become Fleet Manager. This included Taxi, Charter and Public Transit. It was quite challenging and felt like a step down from managing director. Yet I am very glad I did it, it has brought me where I am today. »

Eventually Hermes was incorporated under the Transdev subsidiary, Connexxion’s umbrella and the next opportunity lay ahead for Bart: « In 2007 I became Fleet Manager at Connexxion, which therefore also included Hermes’ fleet, and this was followed by various other positions within the company. » In 2014 Bart became ‘Manager Fleet & Facilities’ and it was in this role that he and his team really came to grips with the ‘Zero Emission’ phenomenon. Something that had existed for years but was not yet really necessary in public transit, turned out to grow into a huge project the following years: the implementation of 43 electric VDL buses in Eindhoven.

« Because we were the first to undertake this on such a large scale, we had to invent the wheel, so to speak. From adapting driver schedules to the charging strategies and setting up the charging infrastructure as efficiently as possible, to consulting with multiple bus manufacturers and clients. It was a big undertaking. »

All those efforts led to an unnerving climax in December 2016, the day the buses were first put into service at a large scale at once. « You have to imagine that literally overnight we brought the diesel buses in and put an entire electric fleet into service. There was a lot of pressure, but we succeeded, » Bart says proudly. Being the first European country to operate a fleet of 43 electric buses; a fine example of what a small country can be great at.

There was not much time to dwell on the success, because soon after Eindhoven the next concession was ready to make the step to Zero Emission: Amstelland-Meerlanden. With so much knowledge gained and with so much still ahead of us, in 2017 the decision was made to set up a special ZE team, for which Bart was asked as manager. « I was hesitant. Up until then I was managing a large team, and suddenly we would be faced with the task of setting up something new with a small group of specialists. But when I looked at the tear-off calendar on the toilet one day, I figured it out. I tore off the page and threw it on my supervisor’s desk the next day. What was on the calendar page? ‘Fuck it, I’m doing it!’ »

Bart thinks back to the moment with a laugh. « Since then, we started working with a group of five people to start using zero-emission vehicles in several places in the country. In the meantime, we’ve learned a lot and experienced a lot, from unexpected soil contamination to hassles with permits. But so far we always get it done. »

In recent years, the Dutch ZE team has become a central point of knowledge for other Transdev countries. « In some countries, like Sweden and Germany, the advance of ZE vehicles is really starting now. You notice in other countries that they are keeping a close eye on us and still regularly ask us to share knowledge. We are part of the ZE Team at our headquarters in Paris with our team and are proud to be a source of inspiration and information. » And it is not only within the company that there is interest in the ZE Team’s achievements. For example, Bart was recently invited to give a training session on Zero Emission at an event of The International Association of Public Transport, known as the UITP.

« By now, the technology has been proven reliable and very good to use in our area of work, » Bart explains. « It is therefore not surprising that it was decided that from 2025 onwards all new buses must be emission-free. Even better, from 2030 all buses on the road must meet Zero Emission standards. Technology is also still continuously developing, so there are still many exciting things to come. This is the future! »