Transdev reinforces its presence in the Netherlands with electric buses

March 28, 2018. Transdev is starting today the operation of the AML (Amstelland-Meerlanden) public transit contract in the Amsterdam region, which includes Europe’s biggest electrical ‘zero emissions’ bus fleet. This contract is one of the largest in the Netherlands, with sales estimated at 1.9 billion euros over 15 years(1).

The operating contract covers the cities of Aalsmeer, Amstelveen, Haarlemmermeer, Ouder-Amstel and Uithoorn, as well as a number of connections with Amsterdam, Haarlem and the city of Ronde Venen including the Amsterdam Schiphol airport, a key element of the Dutch economy. With this complete and innovative electric bus offering, Transdev deploys one of the world’s most modern and cleanest networks.

To date, Transdev operates 100 full-electric buses around the Amsterdam Schiphol airport, while the « zero emissions » bus fleet will continue to be further extended in the coming years. From 2021, close to 90% of the fleet will use electric buses. The network will be operated by our 800-strong staff and cover some 30 million kilometers annually.

In the Netherlands, our two clients in Eindhoven and Amsterdam, have made the choice of high passenger capacity articulated buses (18 meters long), with a lighter battery payload. These batteries are recharged using a dual-system, combining under half-hour quick-charging at the bus line terminal and a complete charge at night (4-5 hours) in the bus garage. Furthermore, electric buses in the Netherlands are charged exclusively using renewable energy sources, mainly from windmills. For Transdev, investment in both contracts represent 250 million euros in Amsterdam and 100 million euros in Eindhoven.

With a fleet of up to 400 electric buses by 2021 in the Netherlands, combined with all the complementary initiatives put into place in the countries in which we operate, Transdev is demonstrating that customer-centric technological innovation and energy transition are now a reality. Transdev Group is the only player in the field able to offer complete solutions on such a large scale. Transdev is the undisputed leader in ‘zero emissions’ public transport; it is with great pride that we again demonstrate that Transdev is a highly committed company, capable of rapidly deploying clean, reliable and innovative solutions.
Thierry Mallet, CEO of Transdev Group 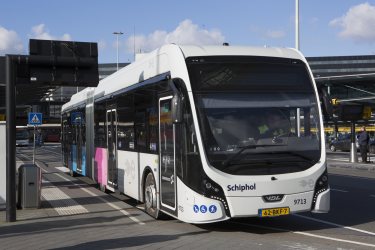 Transdev Nederland is a subsidiary on Transdev Group, leader in three areas : public transportation, Transport on Demand and medical transport. Transdev Nederland employs more than 10,000 people and reported consolidated sales of 805 million euros in 2016. Public transportation and Transport on Demand are operated under the local brand Connexxion or that of the Public Transport Authority, while medical transport is operated under the brand Witte Kruis (White Cross).