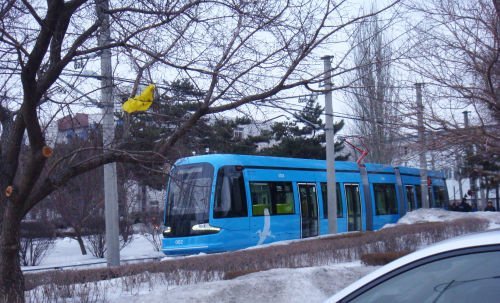 As part of French President Hollande’s visit to China, in which RATP Chairman and CEO Pierre Mongin, and Transdev Chairman and CEO Jean-Marc Janaillac participated, a contract was signed by the Transdev and RATP Dev joint venture to operate Shenyang’s tramway, beginning July 1, 2013.

The contract was signed between the city of Shenyang (capital of the Chinese province of Liaoning with a population of 7.2 million) and an operating company, with an ownership structure typical to Chinese companies, 51% held by the city and 49 % held by the Transdev / RATP Dev joint venture.

The three-year contract covers the operation of four lines over 60 km of track. China’s first modern tramway, featuring catenary-free sections, is part of an urban development project that will eventually transport 150,000 daily passengers. The joint venture will initially operate 30 trams and manage two garage depots and maintenance. This is the fifth system operated by the Transdev / RATP Dev joint venture, following the iconic Hong Kong tramways, the Nanjing urban network with nearly 2,000 buses, the bus network serving downtown Macau and line 9 of the Seoul subway.

The contract, valued at more than 330 million yuan (over 41 million euros) for the operation of the tramway network includes a technical assistance provision to ensure a July 1, 2013 operational launch in anticipation of the 12th “China National Games 2013” which will begin August 31.

We are very proud of the confidence shown to us by the city of Shenyang, reflecting a recognition of our shared expertise in commissioning and operating tram networks. Our presence on the Chinese market since 2009, our many tramway projects in China and our position as the leading European operator in Asia reinforces our strategy of exporting the public transport expertise we have developed in France and our shared interest in winning new markets on this continent.
Pierre Mongin, Président directeur-général du Groupe RATP et Jean-Marc Janaillac, Président directeur-général de Transdev, RATP Chairman and CEO Pierre Mongin and Transdev Chairman and CEO Jean-Marc Janaillac

About the Transdev / RATP Dev joint venture for Asia

The joint venture between RATP Dev and Transdev is a 50/50 partnership created in April 2099 to advance potential development in Asia, particularly in China, South Korea and India. The partnership aims to become one of Asia’s urban transport leaders.

A subsidiary of Caisse des Dépôts and Veolia Environnement, Transdev is a world leader in public transport.

From pre-project to daily operations of public transport systems to project management assistance, Transdev provides consulting and support to local communities. With 101,000 employees in 27 countries and operating 60,000 vehicles and 24 tramway networks, Transdev generated revenues of 7.6 billion euros in 2012.

RATP Dev is a subsidiary of RATP Group, established in 2002 to develop the Group’s operating and maintenance activities in France and internationally, outside the historic network operated by RATP in the Paris region. RATP Dev now operates in 12 countries on four continents and in over 30 towns, cities and departments in France.
All the news