Rail Safety Week which ran earlier this year was kicked off with a launch at the New Zealand Parliament, where the Transportation Minister Michael Wood shared some of the harrowing statistics about near misses and collisions. While things are improving, any near miss or collision is one too many and has lasting effects on whānau (Māori-language word for extended family) and staff.

Transdev Wellington staff were part of the waiata group (Māori music group) serenading the audience at Parliament, which consisted of industry representatives, such as Transdev, KiwiRail, GWRC, NZ Police and Waka Kotahi. A video was shown at the launch featuring New Zealand Police Senior Constable Kim Munro, who stars in this year’s campaign, sharing a personal rail tragedy.

This year’s theme focuses on provincial towns and rural areas, after a study by TrackSAFE found that 79% of crashes between vehicles and trains at level crossings causing death or serious injury happened rurally and in the early morning. The idea is that a poster or brochure should be the wakeup call, rather than a 2,000-ton train, as by then it will be too late.

However, everyone plays a part in safe rail practices and with ongoing upgrades to rail, more of the urban population are likely to be taking the train. At Transdev Wellington, the team strives to report all safety incidents on the network. This is particularly relevant with changes to Hutt Valley Line crossings this year, where the dedicated pedestrian crossings South of Trentham and North of Wallaceville have been removed and a subway put in at Trentham instead. Passengers will be changing their habits and likely finding new shortcuts and so we are staying vigilant.

Meet Our Managers, in which the public can meet and speak with local management was held during the same week in the station concourse, where reps from KiwiRail, Transdev and GWRC are available to answer questions from the public about rail services and project work. This coincided nicely with a reminder to passengers about Rail Safety Week along with handing out some freebies.

For more information and resources about rail safety: Working together to stay safe around tracks and trains | TrackSAFE NZ 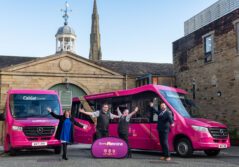