Every year Transdev Australasia recognizes individuals and teams who have gone ‘above and beyond’ to support our customers and communities. 2021 presented many operational challenges for our bus, light rail, heavy rail and ferry teams across Australia and New Zealand. COVID-19 lockdowns meant our operational teams had to juggle unprecedented disruptions.

Transdev Australasia received close to 500 nominations which made for an incredibly competitive field. Because of COVID-19 travel restrictions in Australia & New Zealand a digital award ceremony was conducted with the teams organizing their own local celebrations.

From all the colleagues at the Transdev Group headquarters in Paris, we would like to congratulate all finalists and winners on their achievements this year!

Xavier Atkinson & Evalee Smith from the Sydney Light Rail team were recognized for their outstanding community-building efforts supporting many local causes such as Share the Dignity. Going far beyond their ‘day jobs’ they promoted our Diversity and Inclusion Council activities and organized a Light Rail team for the Wayside Chapel Long Walk Home in October to raise money to support people who are experiencing homelessness.

Murray Gate from the Transdev Auckland team has played a significant role in reducing our environmental impact.  He helped lead the introduction of EMUs, Electrical Multiple Units, that has significantly reduced the amount of diesel that was consumed by the provision of rail transport in Auckland. He is also currently working on several environmental initiatives, including a trial to completely remove the use of chemical detergents when washing trains.

Kevin Hollingshead from the Transdev Queensland team was appointed into the role of Operations Manager in April, following 18 months as Operations Supervisor. Since the appointment Kevin has reduced late running and early running, improving on time performance by 30%. He’s also played a key role in promoting a positive and people-focused culture introducing initiatives such as personalized birthday cards for our drivers.

Peter Chan from Transdev WA has made a big impact on bringing our new driver training to life in a creative and practical way. He has proactively created stand time departure sheets, ‘cheat sheets’ for compulsory stops and an easy-to-read fare guide for our WA drivers which has been very much appreciated as making an impact by his peers and management.

Peter Katarzis from Sydney Ferries has helped the Ferries team address a safety concern by designing and constructing a prototype safety guard.

Suzanne Freestone from Transdev Sydney Light Rail has been recognized for her sensitive and professional handling of a customer in distress. She showed calm, empathy and professionalism when supporting a customer with autism and stayed with them at one of our Help Points for an hour. The customer’s carer was incredibly grateful for Suzanne’s support.

As a buddy driver, Dexter Rebeiro at Transdev New South Wales, is one of the first points of contact for new drivers. He plays a valuable role in mentoring our newest drivers and lives and breathes our safety values. Dexter received 17 peer nominations in the awards – a true testament to how much of an impact he has had across the team.

Natalie Buffery from Howick and Eastern (Auckland bus) was recognized for being a calm and collected team player who supported the team during the disruptions of COVID. Her role focused on implementing at short notice an enhanced cleaning regime for our buses that was appreciated by so many of our drivers and customers. Beyond this, Natalie is regarded by her peers as an indispensable part of our busy operations at Howick and Eastern.

Winners – Team of the Year

South Granville Depot Service Delivery Team received the award because of having consistently gone above and beyond in some trying circumstances. As COVID continued to impact our Sydney team this year, the team had to manage numerous roster changes to keep us running. The afternoon peaks and demands of the on-time running schedule for the South Granville Depot mean that the teamwork under high pressure circumstances if buses are running late to the depot.

Journey Maker of the Year

Mei Chan from Transdev Australasia has truly excelled at numerous projects in the Business Development Team this year and it has not gone unnoticed. She has taken on some tough and vital strategic work such as coordination of our Zero Emissions strategy response across multiple tenders. She also been an integral contributor to many of our key commercial tender responses. 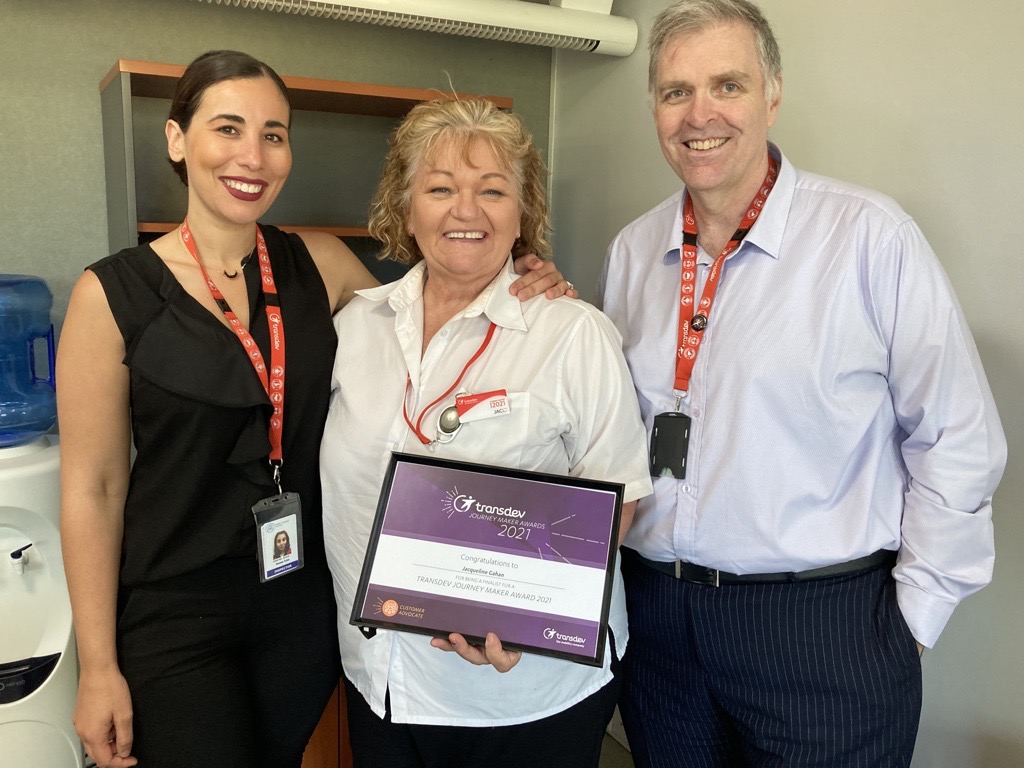