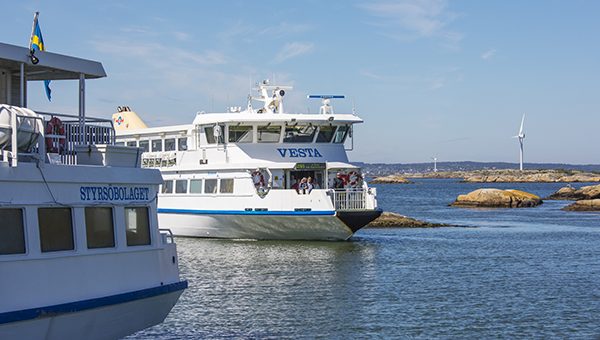 The eco-conscious Swedish ship owner, Transdev subsidiary Styrsöbolaget was determined to minimize its environmental impact and needed a system to promote eco-driving in its fleet. They chose Blueflow because of how it presents fuel consumption in a new and clearer way. Not only did Blueflow reduce fuel consumption with 20- 25%, it also revolutionized the attitude towards environmental awareness.

50% of fuel savings changed the staff’s point of view.

Back in 2010, Styrsöbolaget installed the energy management system Blueflow on four of its 18 ships. One harbor vessel, one high-speed catamaran and two regular passenger ferries had Blueflow installed. Not all staff members were fond of the idea, and the management met strong objections against the system.

In the beginning, the staff was convinced that Blueflow would not make them change their way of navigating and they did not think that it would make any difference on the environment. However, data proved the staff wrong. Not only did Blueflow reduce fuel consumption as a consequence of the captain’s change in navigating behavior, it also changed the staff’s attitude towards the whole eco-driving project.

She also says that they did some surprising findings and that some of the things they thought would not impact on the fuel consumption, actually made an enormous difference and vice versa. In other words, Blueflow changed their perception of how to maneuver the ships energy-efficiently.

Some of our captains saved more than 50% on fuel consumption by changing their way of maneuvering, and they were like ‘Oh do these small changes I’ve made mean that much?' » so they truly adapted to the whole idea about minimizing the environmental impact.

Positive impacts the environment and the bottom line

Based on the remarkable results on the initial four boats, Styrsöbolaget decided to install Blueflow on its complete fleet. The company has 18 ships and manages all boat traffic to the car-free islands in the southern part of Gothenburg archipelago. The Swedish shipowner is determined to minimize its footprint, and with around 5,5 million passengers every year and more than 44,000 running hours, the Swedish shipowner would also have financial benefits from lowering fuel consumption.

Today, Blueflow is a deeply integrated part of everyday life at Styrsöbolaget, and the staff uses it to analyze and to optimize their effort continuously, and it shows on the figures. The company has reduced its fuel consumption with an impressive 20-25% over the last nine years, and that means Styrsöbolaget and its team have saved the environment from a large share of unnecessary emissions and the investment per vessel has been paid back in less than a year, Ellinor says.

Blueflow’s analytic tools enable the staff actually to see the impact of their changed behavior immediately. It helps them to improve their maneuvering methods continuously. Using Blueflow is like buying a gym membership – you don’t get fit without exercising.

The Blueflow way: an eco-conscious way of maneuvering

Implementing a system that changes the regular routines is challenging and requires some guidance until the new methods become routine.

Styrsöbolaget’s management knew that it would take some time to adapt Blueflow, and Ellinor explains, “that it was vital that the staff saw this as an environmental project rather than an economic project to reduce cost. »

For Blueflow to become a success, mutual trust between the head office and the crew on board was necessary. It was important to reassure that Blueflow was not installed to snitch on the captains. « We told the captains, that we were not going to teach them how to navigate their ship more efficiently, and that it was a project that we were in together”, Ellinor says.

The traffic manager stresses that implementing the system takes an effort. “We have held several start-up meetings, and all new captains at Styrsöbolaget get a thorough introduction to the Blueflow system. The captains set their individual vessel goals and are very committed to delivering on their promises”, she says. And the effort has paid off – today Styrsöbolagets people talk of the “Blueflow-way” meaning navigating the ships in the eco-friendliest way possible.

Besides saving considerable amounts of fuel, Styrsöbolaget also uses Blueflow to foresee maintenance. The captains are now so attentive to optimizing the fuel consumption that they contact the head office in case of irregularities. Fuel consumption not only relies on how the ship is navigated, but can also be triggered by problems with, for example an engine, a propeller or a clogged fuel filter. In other words, Blueflow enables the shipowner to predict maintenance much sooner and thus save fuel and prevent downtime.

Styrsöbolaget has even used Blueflow for safety reason to analyze what happened in a situation on the water, so to them, implementing Blueflow have had a lot of positive side effects.

A couple of years ago, Ellinor Svensson and Captain Kim Sjögren were invited to Australia to educate the crew on Harbour City Ferries in Sydney in eco-driving. Several of Harbour City Ferries’ vessels have Blueflow installed, and according to Ellinor, it has been a success down there as well, so it is a good system she concludes.