Transdev Normandie has become the winner of the 2020 innovation trophy of the Voluntary Commitments Program for the Environment (EVE) for the Rouen Normandy Autonomous Lab project (RNAL).

Already a signatory of the “Objectif CO2” system of the Voluntary Commitment for the Environment (EVE) program which aims to establish an action plan in favor of the environment and to measure its progress for 3 years, Transdev Normandie has won the 2020 Innovation Trophy of the EVE-Transport and Logistics program.

Last October, the Rouen Normandy Autonomous Lab (RNAL) project, led by Transdev Rouen and its public and private partners, was rewarded in the category of the most innovative actions, at the Oceanographic Institute of Paris in the presence of the Director General of Transdev Rouen, Guillaume Aribaud, for his experimentation on the territory of the Rouen Normandy Metropolis since 2017.

The challenge of this project is to give an important place to the autonomous vehicle, provided it is carbon-free. This trophy thus recognizes the 1st European service, and one of the most advanced in the world, of shared, autonomous and electric transport on roads completely open to traffic.

In this project, a fleet of 100% electric vehicles, made up of small capacity vehicles (Renault ZOE) for on–demand transportation or autonomous shuttles are deployed. It will be supplemented by i-Cristal shuttles from 2020/2021, the first shuttles that will reach 30 km / h, on roads 100% open to traffic and will be able to transport 16 people.

This ceremony was also an opportunity to promote all the Norman projects planned along the Seine axis and characterized by the implementation of the NIMFEA shuttle (autonomous shuttle between the Vernon station and the Claude Monet Museum in Giverny ) from 2022 and also in Le Havre (on the Cruise Terminal and Hôtel de Ville Liaison) from 2022-2023.

A reward and pride for the Transdev Normandie and Transdev Rouen teams on our company’s commitment to revolutionize public transportation by autonomous and connected vehicles while integrating clean and virtuous mobility. 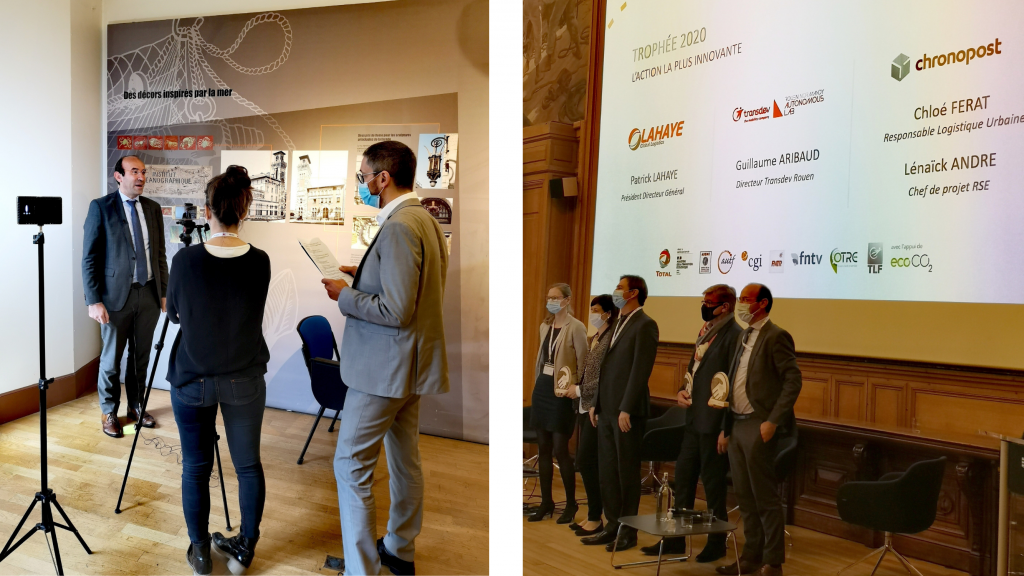