Each year, Pride Month is celebrated around the world; a month dedicated to the uplifting, celebration and the support of LGBTQ+ culture, voices, and rights. It is part political activism, part celebration of all the LGBTQ community has achieved over the years.

Not everyone is aware that Pride Month celebrations commemorate the 1969 Stonewall riots, a series of incidents in New York City that launched the gay liberation movement of the ’70s and ’80s.

In the early morning hours of June 28, 1969, police raided a popular gay bar in N.Y.C.’s West Village, The Stonewall Inn. This was commonplace for the time, but on this evening, the patrons of the bar fought back, starting the Stonewall Riots, which went on for days, and forged a path for LGBTQ acceptance.

The rainbow flag represents the diversity of gays and lesbians around the world featuring six colors: red, orange, yellow, green, blue, and purple; red for life, orange for healing, yellow for the sun, green for nature, blue for harmony, and purple for spirit.

By insisting about the importance of every color of the rainbow, the Pride flag aims to encourage awareness, kindness, and acceptance, and to celebrate inclusivity, diversity and unity.

The Rainbow flag was initially created by the late artist and activist Gilbert Baker in 1978 following the election of Harvey Milk, the first-ever gay person to be elected to office as San Francisco city supervisor in California.

At Transdev, diversity and inclusion represent a journey more than a destination. It is a journey which lies at the core of each employee’s daily actions to promote the building of a diverse workforce and an inclusive culture.

This is why Transdev wanted to take its most visible brand symbol and apply the rainbow colors to highlight and celebrate all the differences each of the employees are bringing to the company as human beings.

The Pride logo will be used throughout Pride month. 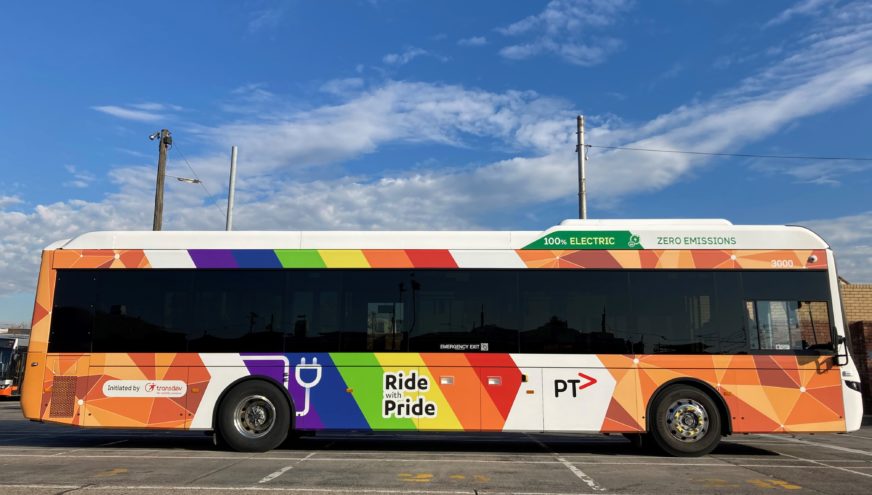