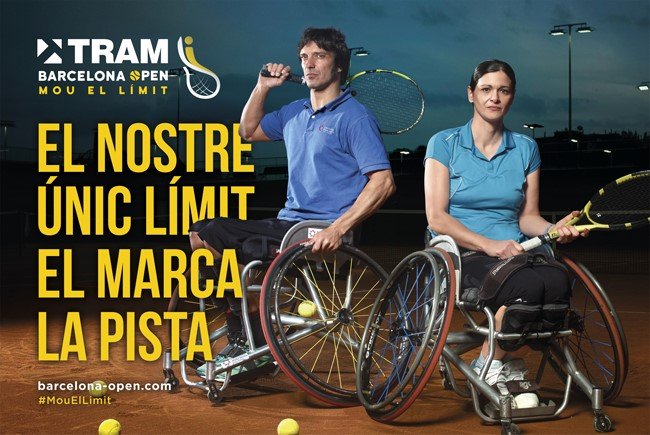 With the slogan, “Our only limit is set by the court”, the TRAM Barcelona Open International Wheelchair Tennis Tournament will be held at Barcelona’s Real Club de Polo from 19 to 22 May. Around 40 players from 15 different nationalities will participate in the fourth edition of this event – whose main sponsor is the Transdev subsidiary, Tramvia de Barcelona, with the organization by the Step by Step Foundation and the collaboration of the Fundació ”la Caixa” and Moventis.

On April 22, the TRAM Barcelona Open was launched at the Real Club de Tennis Barcelona 1899 with the participation of Toni Reig, Director of the Catalan Sports Council of the Government of Catalonia; David Escuder, the Sports Delegate of the Barcelona Provincial Council and Sports Councilor in the Barcelona City Council; Humberto López Vilalta, General Manager of TRAM; Javier Soler, Sports Director of the Real Federación Española de Tenis; Javier Moreno, Head of the Tennis Section at the Real Club de Polo de Barcelona; Jose Coronado, Director of the TRAM Barcelona Open; and Natalia Bettonica, General Manager of the Step by Step Foundation.

Global benchmark tournament with an app of its own

In this new edition after a year hiatus due to the COVID-19 pandemic, the TRAM Barcelona Open is being launched with excitement at going back to normality in the sports competition for individuals with reduced mobility, just as other world-class professional competitions are doing. The tournament is still in the ITF2 category of the International Tennis Federation and is changing its dates to become the first tournament on the clay court tour before Roland Garros. TRAM Barcelona Open scores also count towards the Tokyo Paralympics.

In order to optimize universal accessibility, this year, with the collaboration of the tech company TRIDENIA, the tournament is releasing a mobile app for both iOS and Android operating systems which will share the results, times of all matches, images and videos from the day, information on the tournament and its location. It also features a chat where users can have their questions answered in real time.

And as always, without losing sight of the overarching goal of sharing wheelchair tennis through its matches, exhibitions and activities held parallel to the tournament, making it the benchmark tournament on the global Uniqlo Wheelchair Tennis Tour. The final will be held the morning of Saturday, May 22, and it is expected to be as exciting as last editions.

In order to allow the tournament to operate as normally as possible and guarantee the safety of the participants, visitors and spectators, the tournament will follow the basic safety measures and conduct antigen tests on all staff, volunteers, players and companions before and during the event, in conjunction with the Centre Mèdic Esportiu Ergodinàmica.

Furthermore, there will be one person exclusively in charge of the COVID-19 protocols within the TRAM Barcelona Open team.

Wheelchair tennis is a spectacular, dynamic sport with more than 1,000 internationally ranked players and 160 tournaments in 40 countries on 4 continents every year. The only difference with standing tennis is that the ball is allowed to bounce twice in wheelchair matches. Nevertheless, the players at this level of competition only use a single bounce in 80% of the points, and the serve speed can reach up to 150 km/h. With the TRAM Barcelona Open, the capital of Catalonia, considered a global touchstone in the sport, welcomes a major annual adapted sporting event for four days.

The TRAM Barcelona Open will be open to Barcelona residents free of charge in order to share the values of inclusion, equality and personal development that it represents. The event is acknowledgement of the participating athletes’ desire to overcome limits. All the players participating in the event have an incredible story of personal and athletic achievement. The matches will be divided into two groups: men and women.