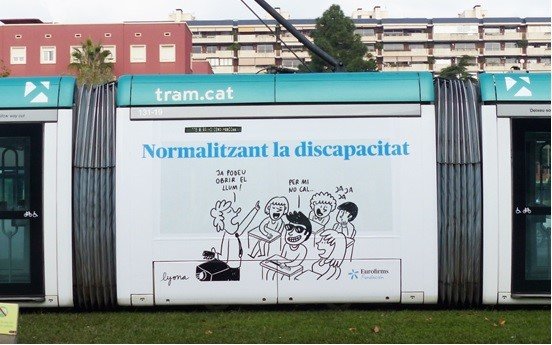 Illustrators Javi Royo, Lyona Ivanova, Miguel Gallardo and Pilarín Bayés have made comics based on real situations people with disabilities experience in order to raise awareness and promote equality. The campaign will be on Transdev’s light rail network Trambaix in Barcelona through December 3rd, Disability Day, and will also be disseminated on the TRAM social media channels.

TRAM is collaborating on the campaign led by the Eurofirms Foundation, which works to foster workplace integration of people with disabilities, to raise disability awareness through humor and respect, with comics by illustrators Javi Royo, Lyona Ivanova, Miguel Gallardo and Pilarín Bayés based on real situations people with disabilities experience.

The campaign aims, in a highly visual way, to promote sensitivity and raise awareness of the right way to treat and the terminology to use with people who have a disability. So, the illustrators have turned real situations experienced by Eurofirms Foundation users into comics.

Tramvia de Barcelona covered the costs to produce and put some of these comics on the seats and exterior of a tram on the Trambaix network, which will run between Plaça Francesc Macià in Barcelona and Sant Joan Despí now through Disability Day on December 3rd. Plus, to raise awareness of the campaign as much as possible this month, TRAM will put the comics by these artists on its digital channels.

Eurofirms Foundation works to normalize disabilities in society. In order to increase workplace insertion, the foundation carries out various actions designed to boost employment among people with disabilities and create more inclusive environments in workplaces. The foundation also provides companies with guidance on complying with the General Law on Persons with Disabilities and manages alternative measures, always geared towards fostering compliance through integration. Plus, it also offers a program to help detect workers with disabilities within companies.

Each year, TRAM works with one organization that focuses on inclusion and raising awareness for people with disabilities, emphasizing International Day of People with Disability. This collaboration is part of the annual TRAM social responsibility plan that strives to give back to society part of the profits from its activities, which you can find at www.tram.cat/ca/rse.