Home » Newsroom » Events » The exhibition "Journeys to School" arrives in France and will be officially opened April 10, 2013, at UNESCO headquarters in Paris

The exhibition “Journeys to School” arrives in France and will be officially opened April 10, 2013, at UNESCO headquarters in Paris 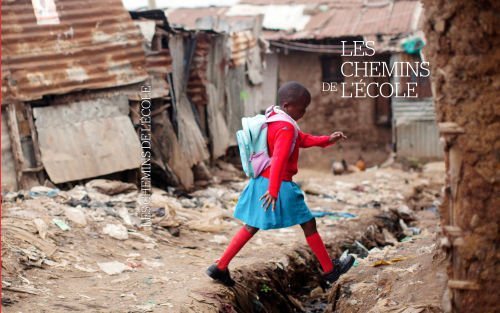 The exhibition will be open to the public from April 3 to May 3, 2013 at UNESCO headquarters before departing on a tour of five French cities from April to December 2013, followed by a world tour in 2015.

“Journeys to School” pays homage to children’s tenacity and joy in living, but even more so portrays the numerous obstacles they must overcome in their quest for education: poverty, lack of public transport, political and religious conflict, urban dangers, natural catastrophes and inequalities between boys and girls.

To produce this major and unprecedented testimonial, 18 photographers traveled the world, from Nigeria to Thailand and from Australia to the United States, between November and December 2012. They followed the paths of schoolchildren to create an unprecedented photographic gallery that testifies to the difficult conditions many children still face today in having access to education.

This exhibition is an invitation to share with these children their difficulties as well as their courage in overcoming themon their “Journeys to School.”