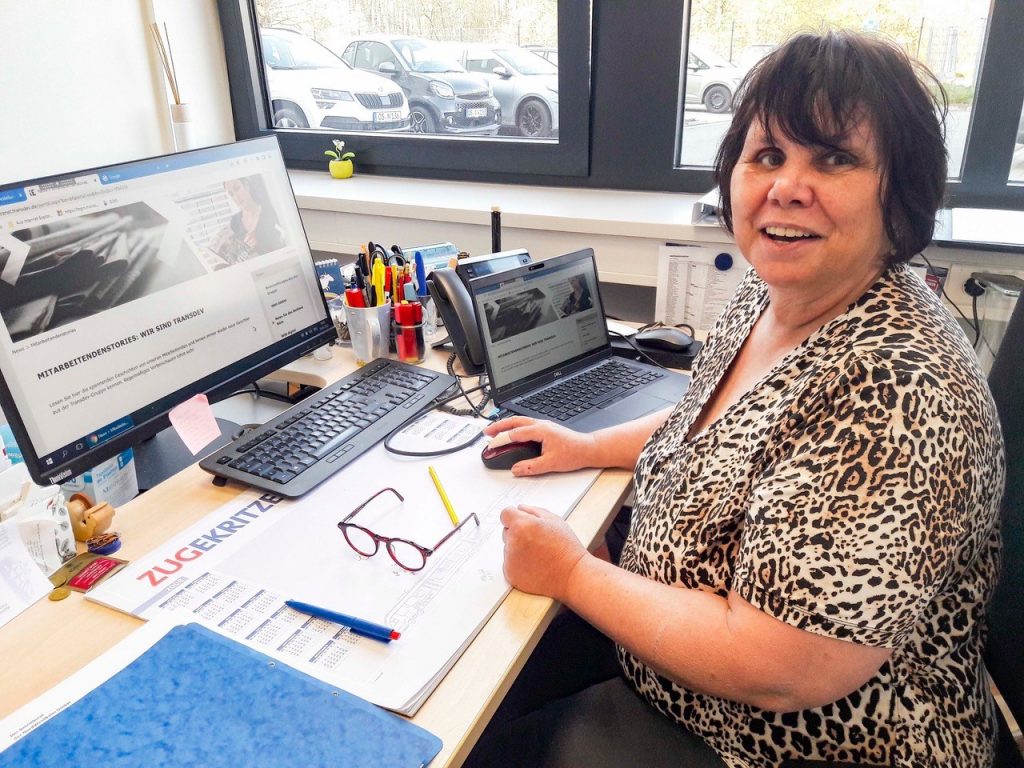 63-year-old Uta Ehlert was born in Calbe (Saale) in former East Germany and has been an enthusiastic railroad employee for 47 years. Starting in 1975 as a skilled worker for Operations and Traffic Services at Deutsche Reichsbahn, the engineer joined the Operations Control Center of NordWestBahn in Osnabrück in 2000.

Uta, you’ve been in the rail industry for 47 years. How did it all start?

When I was thinking about what career would suit me in the mid-1970s, I had a little help: my grandfather was in the post office at the time and my uncle was in the railroad. At the post office, I would have had to pay for my stamps myself, and at the railroad, as an employee, you could travel free. So, the decision was easy. Joking aside, I was already enthusiastic about the railroad as a child, and so the decision was not difficult for me, despite the bad reputation of the Deutsche Reichsbahn.

Why a bad reputation?

In East Germany, we had a saying: « If you have a stupid son, send him to the Bauunion. If your son is even dumber, the Reichsbahn will always take him. » So, the railroad industry didn’t have the best reputation in the days of the German Reichsbahn, but still, of course, the work was very demanding.

What happened next for you?

But you wanted more…

Exactly, I was inquisitive and wanted to learn more about the railroad. In 1978, I started my studies as an engineer for railroad operations in Gotha. After three years and successful graduation, I then worked as a vocational schoolteacher in Gera. In the mid-1980s, I went to the structural engineering department of the Reichsbahn, where, as a Division Manager, I took care of everything that was built and renovated above the platform level. In 1991, I then moved to the Osnabrück region in the western part of Germany with my then partner.

Surely it wasn’t an easy step to leave everything behind and start from scratch?

No, it wasn’t. My partner decided to move west at short notice for professional reasons, and of course I went with him. From today’s perspective, I would react more thoughtfully. I had already missed my job a lot in our new life in the West. And with the big job cuts at Deutsche Bahn in the 1990s, there weren’t really any good prospects for working in the industry. So, willy-nilly, I had to say goodbye to my dream job for the time being and then took a job as a personnel clerk at a temporary employment agency.

Until NordWestBahn was launched in 2000…

Exactly! That was the turning point. When I read the newspaper ad for a job in the operations control center, I was totally excited and applied right away. I had to compete against six other applicants in the selection round and I successfully beat the men. So, on January 1, 2000, I started working for NordWestBahn, which then took over the first routes north of Osnabrück in November 2000. 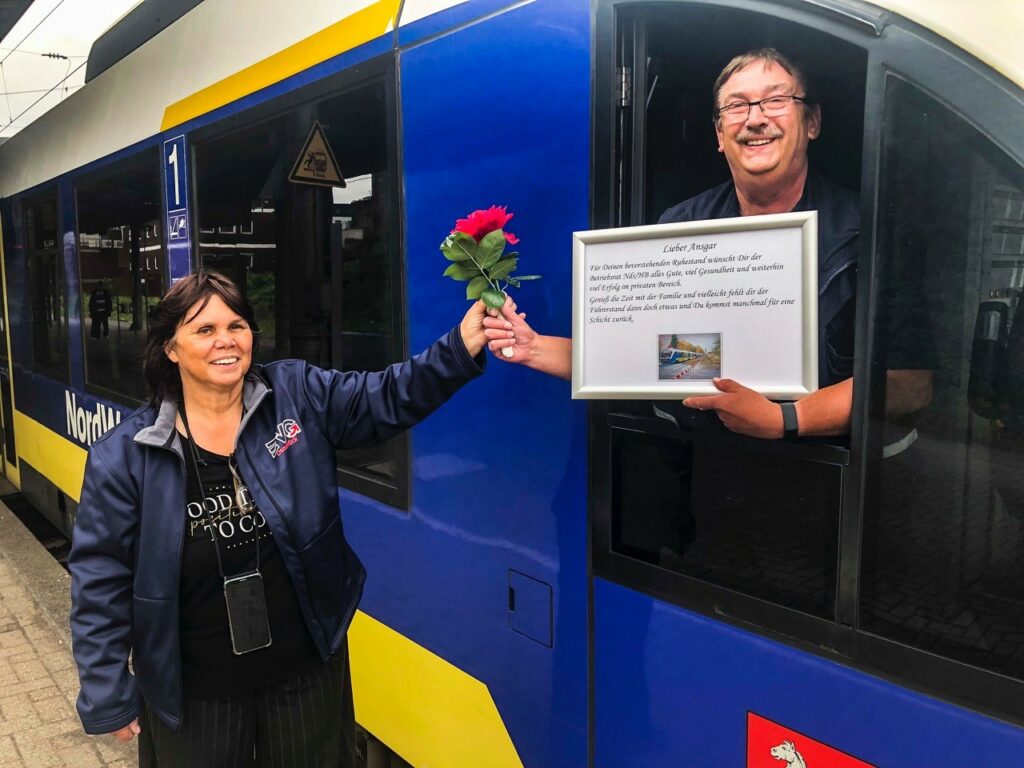 What was it like for you to work as a railroad employee again?

Totally exciting. I was able to build up NordWestBahn from the ground up and get it ready for the start of operations in just under a year. We first had to build up a network with our colleagues from Deutsche Bahn in the signal boxes and at the stations so that everything would run smoothly when our trains started running on the Weser-Ems network. At the time, NordWestBahn was the first private railroad in Lower Saxony to take over services from Deutsche Bahn.

What was it like for you as a woman to assert yourself in a supposedly male domain?

I don’t think it’s so much a question of whether colleagues are male or female. In the end, it’s a person’s character that counts. If you understand that life and work are always a matter of give and take, then success is inevitable. If you only do one or the other, you will lose in the end. But clearly, the conditions in the industry are not so easy for women. That was the case in the past, and it’s still the case today. Many men don’t trust women with the necessary knowledge. As a woman, you must assert yourself with your knowledge and skills and not let anyone tell you what to do. Men often don’t have this challenge. So, it’s sometimes easier for them.

You had to give up your job at the control center after a serious traffic accident in 2004. How did you cope with that?

Of course, it was very difficult for me. It also took me a good year to get back on my feet. Unfortunately, the consequences of the accident meant that I was no longer fit for duty and had to give up my job at the control center. But instead, I found a new environment in the administration, as a works councilor, which I became in 2004, and later as an assistant to the management until I was released for committee work, which I do today.

Many employees call you « Mom of the NordWest-Bahn ». Does that suit you?

That’s great for me, I’m honored by it. I always say that NordWestBahn is my baby. In that respect, the « mom » thing fits quite well.

You’ve been working for a long time – are you already looking forward to retirement?

For me, my work is my vocation. But of course, I’m thinking about the future. If I ever stop working for NordWestBahn, I’ll have to move away, otherwise I won’t be able to get away from it. I already have a plan in mind: I would like to open my own guesthouse in the Ore Mountains and welcome many of my old colleagues there. But now I still have enough to do, and I want to achieve a lot for my colleagues.

Tell us about it…

One of our goals was to bring women onto the Transdev Supervisory Board in the February 2022 elections. And we succeeded! When I saw the first lists for the Supervisory Board elections on February 9, I immediately noticed that there was not one woman on the lists for the employee/trade union representatives. That is a no-go for me. So, I found a female colleague and two male colleagues and submitted my own NordWestBahn list. Of course, we didn’t drop the men, they belong to it too. We wanted to be elected to the Supervisory Board under the motto « NordWestBahn for Transdev”.