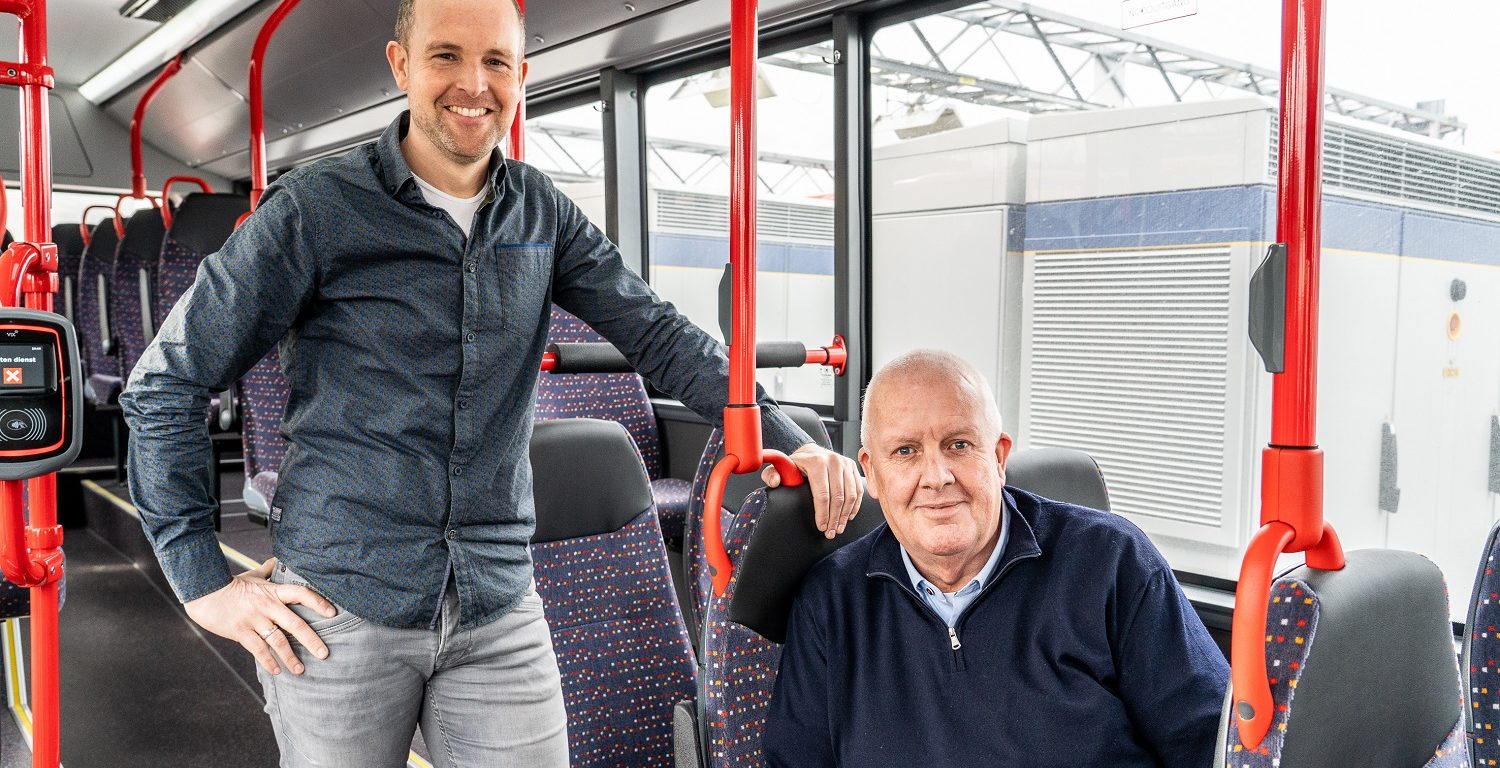 It was Sunday, February 7, 2021, early in the morning, when the Netherlands was covered under a generous blanket of snow. And although at that moment most people were asleep under their own warm blankets, for father and son Frank and Jesper van den Berge it was all hands on deck. Is it safe to be on the road? Are the roads accessible? Can our drivers get to work at all?

For Frank, Manager of Operations in the Amstelland-Meerlanden and Zaanstreek Region, and Jesper, who works as a specialist in the field of Strategic Infrastructure and Quality, these are the moments that give them energy. In fact, Frank enjoys it: « I prefer to be in situations like this 40 times a year. It’s not that I’m out for chaos, but I do enjoy being able to steer and direct it; that’s when I’m completely in my element. »

« The moment the weather forecast indicates a high probability of serious disruption to the timetable, a lot of cogs start turning in a lot of places, » says Jesper. « But in terms of preparation, it’s tricky. Passengers are informed that there is a chance of delays or even ride cancellation, but we only see what the real situation is at the moment itself. On Sunday, it soon became clear that it was simply not sensible to drive out. Road sweepers around Schiphol Airport had to be towed away because they were stuck, and the drifting snow combined with the strong wind meant that the situation changed by the minute. From the outside it might have seemed very quiet in our company, but behind the scenes there was a lot going on. »

Just because the vehicles stayed inside on Sunday doesn’t mean that the rest of the day could be spent relaxing, Frank says. « It’s a continuous process. The situation was different in every region. If a bus was sent out somewhere, it was monitored intensively. Entrepreneurship is also about taking risks, so we started up again cautiously on Monday. The idea was to at least offer a service instead of a timetable. But obviously only if it was safe and responsible. At times like that you notice how important trust and cooperation are. Without the efforts of all colleagues, it would never have gone so well, » Frank says proudly. His son adds: « especially the drivers have a crucial role, they are our eyes on the road. By trusting them and listening to their information, we were able to act adequately. In the end, we were therefore able to return to normal schedules quite quickly. » Frank thinks back to the feeling of that moment, and smiles. « Those are the special moments, that really give me a thrill! »

Working together as father and son; it seems like the perfect solution. Yet they work in different locations and actually try to avoid each other a bit. « You quickly have the appearance of bias, as father and son, » Frank explains. « We want to avoid that appearance of partiality at all costs. » Jesper thinks the same way. « Fortunately, I’ve been working within this company for just under 20 years now and by now no one thinks of me as just Franks son anymore. I have earned my own spurs. Our paths within this company have crossed several times, at several locations. From Friesland to Gooi & Vechtstreek, from Almere to AML; at one point it even seemed as if my father was chasing me, » says Jesper, laughing. « Sometimes I have a bit of a dilemma; for example, it’s strange to address him as ‘dad’ in a meeting, but it’s also weird to call him by his first name. He was even my supervisor in Friesland once, but we will never do that again! » Frank is chuckling and agrees: « Jesper worked in Friesland at one point and I worked in Almere, a good bit apart. Actually, that was quite nice! »

They now work in the same area again, but each in a completely different role. As Operations Manager, Frank is a proverbial jack-of-all-trades. « I see myself as a link between different departments within the company, I ensure good cooperation between multiple concessions. But basically, I do everything that comes in front of my feet, » he says, smiling. Just like his father, Jesper also fulfills a very versatile role: « I feel like a spider in the web. I have daily contact with multiple parties, such as clients, road authorities and fellow transport companies like the Amsterdam Public Transit Company (GVB). In fact, I act as kind of a focal point between the region and external parties to ensure that everything goes smoothly in the event of any kind of inconvenience. This may involve sudden disruption, such as the recent snowfall, but we are also working on major infrastructure projects that will be implemented in the coming years. »

That Frank and Jesper are very content in their positions is evident when they talk about it. After 37 years within the company, Frank knows that it is very important to be proud of your own position and the colleagues you work with: « in every concession we have an enormous amount of quality on the work floor, you have to be proud of that. You must always feel that ‘your’ territory is the Champions League. We work in an exceptional company and I have no intention of stopping just yet. I started here as a bus driver and I still have a lot to learn. I’m 61 now, but I’ll easily continue until I’m 80; they’ll have to kick me out! »