To Wolfgang Schliersmair you must like people working in public transit 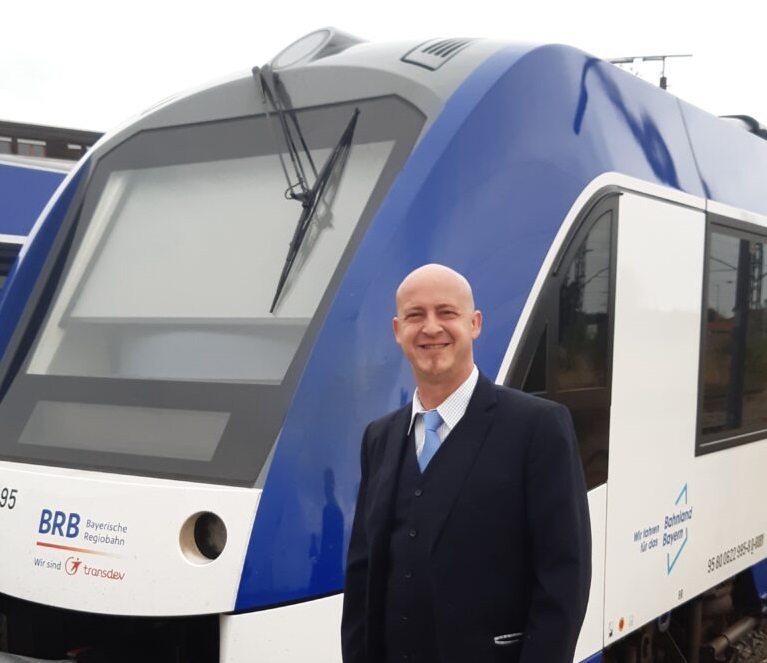 Wolfgang Schliersmair is a people person. If you observe Wolfgang when he’s on the train of the Bayerische Regiobahn (BRB) with a new colleague who is still being trained, you’ll notice it right away. He is friendly, unagitated, but also witty and good at explaining things. The Bavarian, who comes from and lives in Schliersee, does not want to hide his Upper Bavarian dialect at all.

As a former restauranteur, he started at BRB in 2019 in the Oberland network as a career changer and Customer Service Representative. He is now Team Leader for Customer Service at the Holzkirchen location and responsible for 45 colleagues. He obviously feels at home in the railroad world and is happy today that he dared to make a new start in 2019 in a previously unknown world and since then has also had time again for his hobbies and his child. We recently sat down with Wolfgang to learn more about his job and career with Transdev.

Greetings, ticket please! » How many times have you said this sentence? Doesn’t that get boring?

No (laughs), not at all! That’s only a small part of my conversations with passengers. I also give information about tickets, connecting trains, listening to little stories and joke with children. It’s a lot of fun, even though even though, as a team leader, I’m not on the train as much anymore. I miss that a little bit.

Tell us how you came to work for BRB. Was always been your dream job?

Apart from riding the train twice a year, I never had anything to do with railroads. I had started an apprenticeship as a hotel manager, then changed to a restaurant manager and worked a lot at the bar.

So, you had to find an alternative, and that was called BRB?

Yes! A former temp cook who became a train driver at the BRB, I got the tip that I should try out the to get a taste of the railroad industry. I then noticed that I had some guests from the gastronomy and acquaintances, who also worked for the BRB. So, I just looked at the company. I really wanted to continue to have something to do with people. And in my mid-30s, it was a time to change completely and dive into a new professional world.

What were your first impressions? How did you find the hiring process?

I was very positively surprised by the good teamwork in a company that is not entirely a small company. The hiring process was a classic process: application, interview, hiring. Relatively quickly, I also had the opportunity to participate in a delay workshop and a project on civil control, which was a lot of fun.

And the shifts you had to work as a Customer Service Representative weren’t a problem for you?

Oh yes, they were at first. But that’s just habit. It was more difficult to learn again after 15 years without school. I had to struggle a bit at the beginning and learn how to study again. But if you feel like it you can do that, too. Laws, tariffs, regulations, operational service, train connections with connecting times – the two-month training period is demanding. After cramming in the group from morning to afternoon, you have to you have to sit down again at home and continue learning. In between, however, there are also practice days to exercise what you’ve learned on the train.

What impressed you most about the training?

Do passengers sometimes get on your nerves?

The positive experiences and incidents clearly outweigh the negative ones. After a while, you get to know many of the passengers and know who rides to work every day. For example, there was passenger, for example, I always let him sleep early in the morning. I knew he had a subscription. I got perfume samples from him in return. He worked for the Louis Vuitton, the luxury goods company. Every now and then you get chocolate from passengers as a gift. During the Oktoberfest in September, they also give you roasted almonds.

Since April 1, 2022, you have been a team leader and no longer travel on the train as often as before. You spend more time in the office. Why did you choose the desk?

I wanted to develop myself further and took the chance, that was offered to me in the company. And Team leader is not a boring office job. On the contrary, I I’m still on the train talking to my colleagues. Of course, you also must organize a lot and often react quickly and at short notice. I often don’t know I often don’t know in the morning what the day will bring. It’s not everything can be planned on the railroad. But these daily challenges are fun for me. It’s a bit like it used to be in the restaurant business.

What qualities do you need to become a Customer Service Representative?

You must like people, otherwise you can’t do this job. Everything else is doable. We have very nice colleagues in the team who are always happy to help you during your training. Many different characters come together. But I was surprised that there’s such a pleasant atmosphere among them.

Who can become a Customer Service Representative?

Anyone who is good on foot because you have to walk a lot on the train. Age is hardly an issue. Our age range of entry-level employees is between 20 and 60.  You also need to be stress-resistant, because in the event of a disruption react quickly but calmly, ground the « grumpy » passenger, explain the situation to him or her. Remain calm and objective, and it’s better to say once that you don’t know how to proceed, instead of inventing something. And pass on the information you have to the passengers. It’s always better to give the passenger bad news honestly than none at all. And then the shift ends, and you’re still standing you’re still on the train because it can’t go any further due to a malfunction.

It’s not just the passengers who get annoyed, but also the customer service representatives and train drivers, aren’t they?

Of course! But when I see the sunset over the Wendelstein and the villages slowly go to sleep, that makes up for a lot. Or a sunrise, when we are driving towards Munich, in the Isar valley – that is really a dream and worth all the effort!