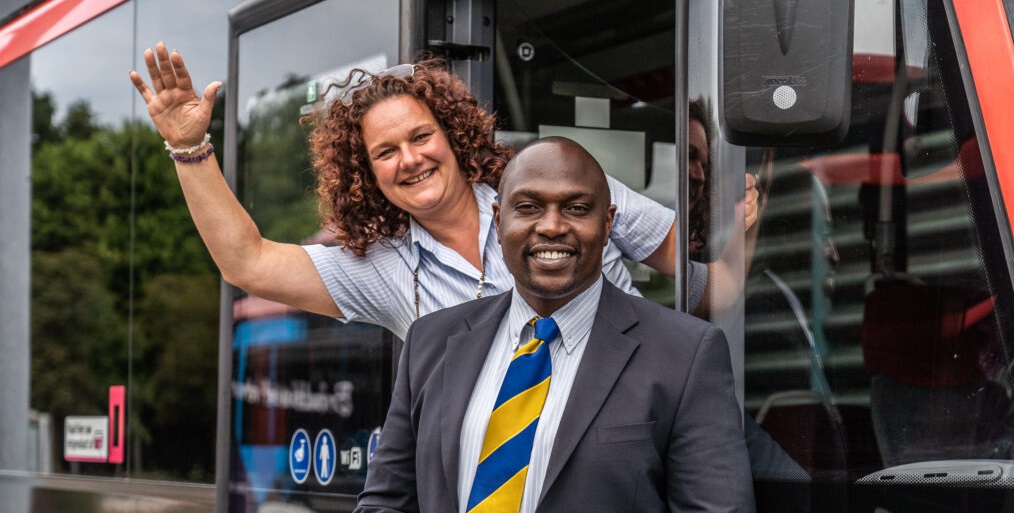 At the Transdev subsidiary Hermes depot in the ever-friendly city of Eindhoven in the Netherlands, we recently met two completely different bus drivers, each with their own unique background and experiences. Despite having worked together for a few years, they soon discovered that they didn’t really know each other.

At a long table, Ronnie Matovu takes a sip of water, relaxed and smiling softly, while next to him, his colleague Chantal Bang is not so able to hide her enthusiasm. Despite the contrast, they both soon seem to have found common ground: « Me, a bus driver? I would have never thought that!”

« I have been working here for 15 years now. But although I used to take the bus a lot as a child and enjoyed it immensely, I never saw this happening, » says Chantal, laughing. « I used to have a dog walking service; I am a real animal lover. I tame everything that is wild! » Chantal also worked in the hospitality industry and in retail, where especially interacting with people gave her energy; something that she also experiences in her current job every day.

« Apart from animals, I have always been working with people. The social aspect of this work is what makes it so enjoyable for me. For example, I recently came to a bus stop where a child was standing with its mother. Even through the closed door, I could lip-read what the child was saying out loud: ‘Oh, it’s that nice driver! Those things really make your day. »

But now we still don’t know how Chantal ended up on the bus… « Oh, that’s actually quite funny! » Chantal bursts into laughter. « My husband is the instigator. He works in engineering and at the time he was involved in the technical design of the station square in Eindhoven. After a working day, he came home and exclaimed enthusiastically: ‘I got it! Why don’t you become a bus driver!’ My first reaction to this? I laughed out loud at him! In hindsight, that first reaction was quite strange. Because, at his insistence, I gave it a chance and it turned out that I had a knack for it! I passed all my exams in one go!”

Chantal then turns her proud gaze to Ronnie. « How long have you been working here? »  That turns out to be a bit shorter. « I started three years ago as a temp, but now I have a permanent contract. That feels really nice. » Ronnie smiles and goes on to explain how he ended up ‘here’. « I grew up in Almere, but for a while I lived in Nottingham, England. My partner is English and together we have three beautiful children. During that time, I was an accountant. » Chantal looks at him admiringly: « wow, that’s a lot different from what you’re doing now! »

Ronnie continues: « That’s right! The work was not bad, but I noticed that I was ready for something else. Actually, it all got a bit accelerated because of the impending Brexit. We didn’t want to wait for that, were afraid of what it would mean for the economy and our lives there. In the meantime, my parents had moved from Almere to Eindhoven, and it felt like a logical step for us to move to the beautiful province of Brabant as well. »

It soon felt like home for Ronnie and his family. « In Nottingham life was cheap, but the neighborhood was not very pleasant. A big difference with where we live now; Eindhoven feels much safer and warmer. I didn’t immediately have the idea to become a bus driver, but when I saw the vacancy I thought ‘why not? Three years later I’m here, and I’m very happy with my job! »

Although the two colleagues ‘know’ each other from work, they had no idea of each other’s story. The conversation soon turns to their children, of whom Ronnie has three. Where some people have to do some math about their ages, he has them ready. « They are now 6, 8 and 9 years old. So, they are pretty close together, » he says with a laugh.

Chantal immediately realizes that, in addition to their different backgrounds, there is also a considerable difference in the composition of their two families: « Well, that’s certainly different for me!” She laughs, pauses briefly, and says: « There are 12 years between my two boys! » Ronnie just about chokes on his gulp of water. Chantal has to laugh even harder. « I now have a toddler and an adolescent living alongside each other in our house… And actually, it’s hilarious! »

When the conversation eventually turns to ‘work’ again, Ronnie can’t help but conclude that he’s really enjoying himself. « When I was a temp, I found it a bit harder, because you didn’t know when you were going to work until short notice. But now I have a fixed schedule and that gives me a lot of peace. Working on the bus is relaxed and you actually have a lot of freedom. Not so much in terms of routes or timetables of course, but you do in terms of the feeling it gives you. It’s a world away from spending your days in an office.”

Chantal nods in agreement and adds: « The contact with passengers is so incredibly rewarding. I also feel that I meet far fewer ‘annoying’ passengers than some of my colleagues say they do in their jobs. I think it’s also very much down to your own attitude as a driver. » Ronnie agrees that this is an interaction: « If people are happy, you are too. But it’s also the other way round; if you greet your passengers in a friendly and cheerful way, you’re bound to get that back. »

Unfortunately, the drivers have noticed a shortage of drivers. « We could use some new colleagues, yes! But I’m doing my part, I like to think I’m a walking billboard for this work, » says Chantal, laughing. « In fact, I even try to make future generations enthusiastic. For example, I go to schools to tell them about our beautiful profession, which I really enjoy doing! »

Ronnie can also recommend everyone to become a bus driver: « My first job was in a factory, so incredibly stressful. It’s a real contrast to this work; it’s relaxed, you don’t have a boss looking over your shoulder and you don’t take your work home with you. And not unimportantly: the salary is good. Very happy that I took this step! »