Home » Newsroom » Employer branding » Captain Linda in Sweden: being close to the sea is about freedom

Captain Linda in Sweden: being close to the sea is about freedom

Linda Öhrbom, is captain at Styrsöbolaget, our ferry operation subsidiary in western Sweden. She lives in symbiosis with the sea. When she is not in the house on Brännö island in the Gothenburg archipelago in western Sweden, she bikes along the quay or operates the ferry Älvfrida back and forth on Göta river.

The ferries in the river have many names: Älvsnabben, Älveli, Elvy and Älvfrida. The latter constitutes Linda Öhbrom’s workplace. She operates it several times a week and is highly responsible when it comes to safety and working environment on board.

Today she got up at 5:00am. Then took the ferry from Brännö to Saltholmen and the bicycle over Älvsborgsbron to operate the first trip from Lindholmen. The days she starts at 1:00pm, the bike ride instead goes from Saltholmen to Stenpiren. It is a road she likes because it is flat and can withstand the pace, but dislikes because it is boring in places.

“It is mostly parking lots and traffic to keep an eye on. But when I cycle along the quay at Eriksberg, it can also be cool to be so close to the shoreline when the sun rises in the east, especially early in the morning. Sometimes I pick up the phone and film” she says.

Linda Öhrbom grew up in Uddevalla but moved to Gothenburg in 2005 after her husband inherited a house on Brännö. Since then, they have lived on the island all year round. She says she gets the best of both worlds: rural life on Brännö and city life around the river.

Linda has worked in the river since the age of 23. She started in the restaurant on Stena Line and during a safety training she was attracted to learn more. Linda started studying to be a Ship Commander Class VII at Chalmers and combined the study with working as a deckhand on the ferries. Once fully trained, she practiced at Stena Danica and gathered more sea time to advance to sailor. She then started working full time as a sailor at Styrsöbolaget, later Helmsman and finally as Captain. In addition to Älvfrida, Linda currently operates the catamarans in the archipelago, such as Valö and Rivö. 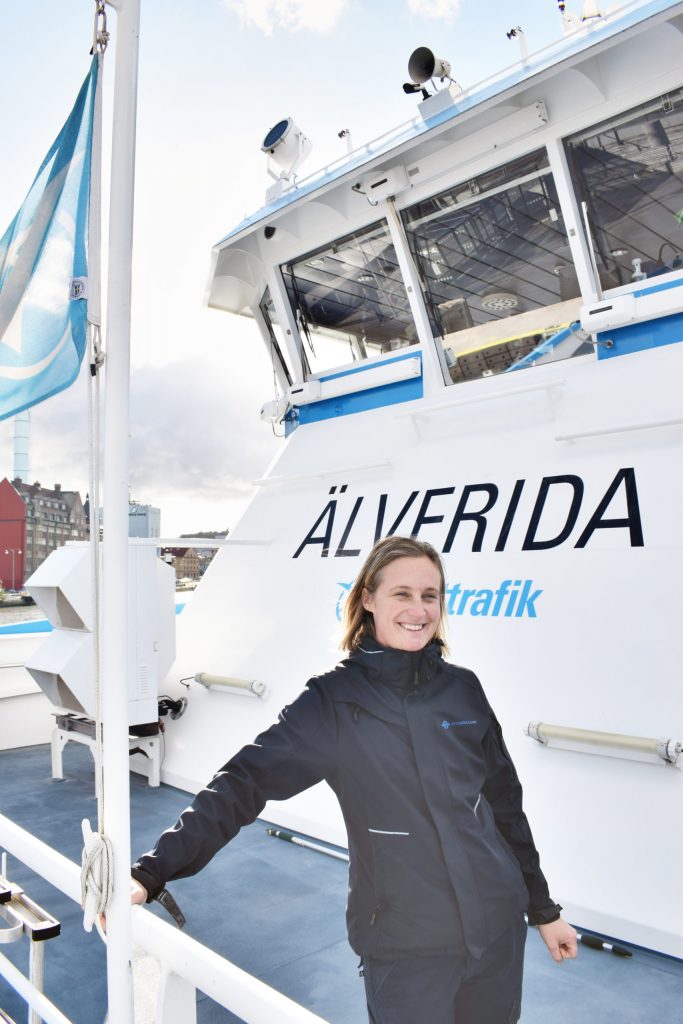 From the ferries she follows the seasons and the popular currents. In the summer, the quays are of a completely different character than in the winter.

As a sailor, or deckhand as they are called in everyday speech at Styrsöbolaget, she had direct contact with the passengers. She remembers some passengers in particular. Once two energetic guys went on and after a while one of them saw the seal Kent, who swims around in the river from time to time and who got his name from the staff on board. She also remembers a tourist from Scotland who took a tour of the archipelago. He wanted to visit all the islands, but Linda thought he needed to do something on each island to say that he had actually been there.

Linda has many good examples from stays in seaside cities, such as New York, Beirut and Sydney. When the family goes abroad, they always discover the surroundings near the water.

Tourism always lands by the sea, it feels like. We apply there automatically. Sometimes I take the boat from home to Eriksberg just to stroll and get the feeling of being abroad. My kids want to go there to play on the playground they love, and I want to go there to stroll with an ice cream. Water is important to me. Being close to the sea is about freedom.